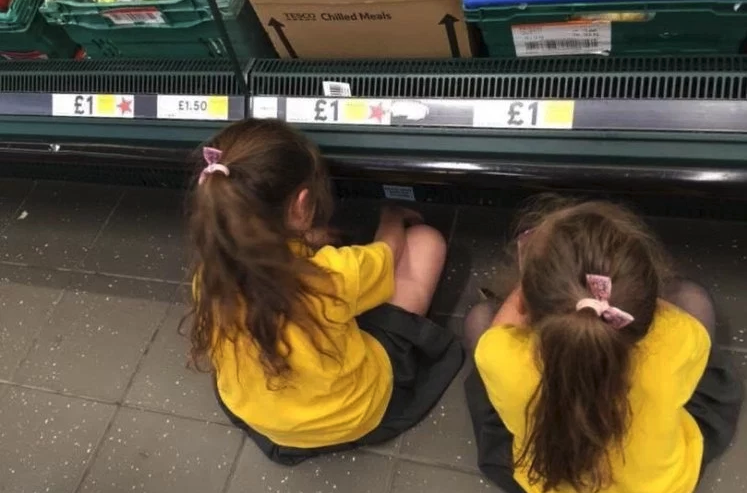 A mother has gone viral recently after a photo of her daughters sitting on a supermarket floor were posted to Facebook.

The two little girls were asked to sit in the vegetable aisle after their mother asked them to calm down when they were running about the shop.

When they failed to listen, and ended up hitting another customers trolley, their mother told the girls to sit down and take 10 minutes time out.

The six and seven-year-old’s mother Louise Palai, 35, said that she has received a mixture of messages, many showing support for her parenting methods, and some saying she went too far.

Louise told Metro in an interview: “I didn’t lose my temper…very quietly I went up to them, took them to a quieter area of the shop in the fruit and veg aisle, and told them to sit down.”

“They looked at each other but they didn’t argue. They sat cross-legged facing the shelves with their heads down.”

She continued, “I got a few funny looks from people, but and old man who’d seen everything gave me a nod as if to say ‘good for you.”

The mother said that she took the picture to remind the girls what happens if they misbehave in public.

Louise told Metro that: “After they had calmed down, I explained to them why I had made them sit down, I always explain why they are being punished.”

The girls both apologised to their mother when the ten minutes were up, gave her a cuddle, and continued their shopping trip.

It wasn’t Louise who posted the photo to Facebook, but rather a friend of hers who thought it was a great method.

Hundreds of comments rolled in, the majority of which Louise said were positive, but some people accused her of embarrassing her children.

“I think if your child is being naughty then they should be punished there and then, because if you do it when you get home you might forget or the child could forget what they did wrong,” Louise said.

She continued to say that she doesn’t have to use the method often, as her daughters only misbehave on the odd occasion, and when she’s used the method before it’s worked.

Louise who works as an Avon lady said: “I want my kids to behave in public and grow up to be respectful adults.”

She said both of the girls are alright about it because she always explains why they are being asked to take time out.

“A little bit of tough love is good. I would never, ever, use physical punishment against my children but this kind of measure works.”